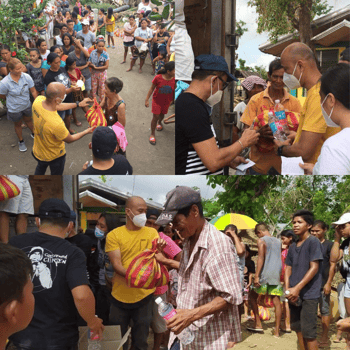 The powerful storm made landfall on the islands of Visayas and Mindanao in the Philippines, bringing heavy winds, rain, storm surges, and landslides and destroying the homes of thousands of people in  areas that had already been hard hit by the COVID-19 pandemic.

The Philippines government estimates that Odette caused billions of Philippine pesos in infrastructure damage and the destruction of homes, other private buildings, and crops. Cities and villages were deprived of electricity and telecommunications services because of downed power lines, and clean water  supplies became a problem in many areas.

Ng led an effort to provide help to the people of hard-hit Negros Occidental in the Kabankalan district of Visayas. On February 12, 2022, TES Philippines organized and hosted an event to provide aid to storm victims in the form of 650 food packs distributed to Negros Occident families affected by the typhoon.

The situation in damaged areas was critical. One could not help but be moved to act to help those in need.  - Terence Ng, TES Chairman.